Because this is literally the best we could come up with: retribution

This game was started at the Berlin Mini Game Jam January 2014. My friend Michael Hussigner was visiting, we teamed up, and we brainstormed about the theme “Strange powerups”. We decided to go for a straight forward shoot-em-up game and introduce some humor in the form of annoying powerups that would get in the way instead of helping the player.  Other anti-features for humorous purposes are: fixed score (“a billion”), so that destroying enemies is kind of pointless, and a huge logo occupying a significant part of the screen space, lots of misspellings, ridiculous “things” as bullets of some of the powerups (like cheese, cats, sushi, or bottles).

At the end of the jam, even though I had not had enough time to implement the powerups themselves, we had a basic shoot-em-up game that was already quite fun to play. I spent some days later that week implementing powerups and more enemies as I was coming up with them. Somehow part of the humor was lost, the “normal” gameplay was engaging enough that I toned down the nastyness of the powerups, them becoming a mix of “good” and “bad” ones. Part of the challenge in the game is to be able to avoid the ones that get in the way.

The game is available at itch.io under a pay-what-you-want basis.  If you like it, feel free to set your own price and support the developers (Michael and myself).

There is the possibility of a sequel to this game. It would be a longer game with similar game mechanics, but more content in terms of new types of enemies, new types of powerups, and possibly introducing boss fights. It would be published under a shareware model: the first level would be completely free and fans would have the chance to purchase the full game at a fixed price. It depends on the reception of this one, if there is no interest then there’s no point in starting work on a sequel.

I uploaded version 1.1.  It includes more music, some fixes in gamepad support and menu, better explosions and 14 achievements to unlock. 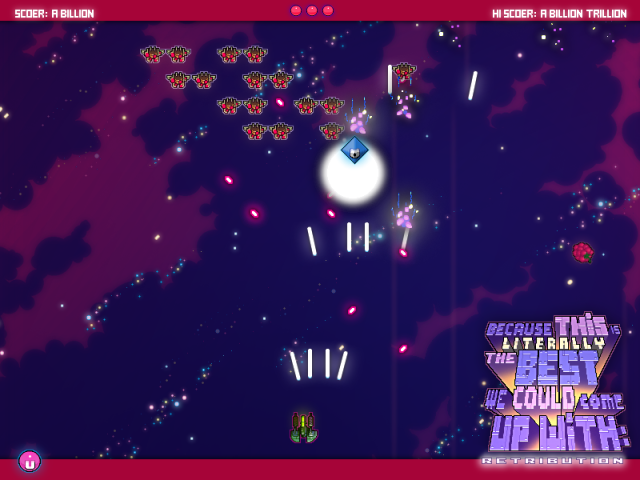 Update March 14, 2015:  I made a new blog post linking all the videos I could find of people playing the game: videos.

2 Responses to Because this is literally the best we could come up with: retribution