We started the Berlin Mini Game Jam on October 2010.  Taking inspiration from the BIGjam, our first jams were 4 hours long, once every two weeks.  We soon realized that this format was a bit stressful and didn’t quite work, so we switched to the current format, 8 hours, monthly.  “Mind the gap” was a game I wrote in Löve2d in collaboration with John in our second MiniJam.  The theme, if I remember correctly, was “Indirect control”, so we came up with the concept of a platformer game where the character would move on its own, the player has to help him reach the goal by properly placing the platforms using drag and drop controls with the mouse.

Being a 4 hour prototype only, you can imagine it’s very rough.  We didn’t even have time to replace the placeholder graphics, which are coloured rectangles (blue for the movable platforms, green for the character, yellow for the goal).  Still, I had time to make 3 levels for that game, it’s something.  Some months later I wanted to put some more work into it, preparing a level editor and creating new types of platforms (bouncing platforms and “death” platforms), but unfortunately I got distracted by other projects and never went further with the polishing work.  I still think it might be an interesting concept to develop, maybe some day in the future.

What I’m sharing here is still the jam version, although you can find the extra code in one of the branches of the repository. 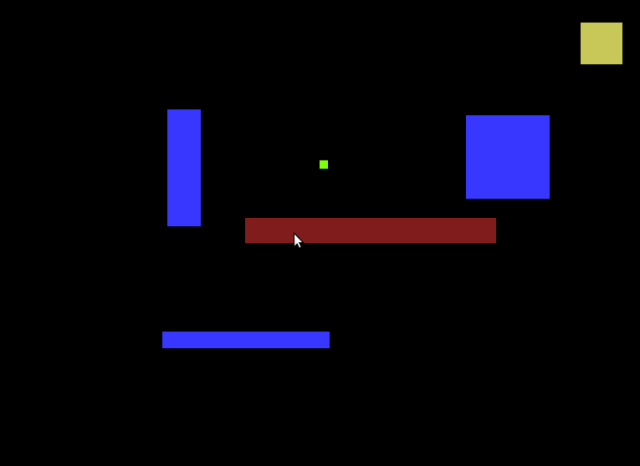 This entry was posted in Berlin Mini Jam, Finished Games, JamGames, Löve2d. Bookmark the permalink.
%d bloggers like this: