A Fistful of Pasta

Game made during the Berlin Mini Game Jam A Maze Edition, April 2019.  One of the themes was “The Pasta is out of control!”.  We had the idea of making a spaghetti western themed game, in an obvious pun.  The story does not take place in the Gunfu Deadlands universe.  Instead it’s a modern time setting, but on another side of the Mississippi where the wild west still exists and totally looks like in that famous film genre.

My friend Tommy Friese came up with the concept and made some nice music to play in the background for atmosphere.  Myself, I wrote some silly story in Twine.

The Quest of the Daisy Flower

Usually at the Berlin Mini Game Jam we select not one, but three themes.  The idea is that the themes should serve as inspiration, and some participants might not be very inspired by the most voted theme.  When that happens, they have two more themes to choose from.  Sometimes, the inspiration comes from trying to combine all three themes into one… “for maximum effect!”.  And if they don’t like any of the themes, they can just “ignore them and do something completely different”.  These are our two recurring jokes.

At the December 2018 Mini Game Jam, the themes were:

Our team, with Galina illustrating, and me writing some words on Twine, took inspiration from Sergei Eisenstein’s classic film “Battleship Potemkin” and decided to tell the glorious story of another battleship: the цветок ромашка (Daisy Flower).  The title of the game is “The Quest of the Daisy Flower“.

Important note: every passage has text and links.  If you don’t see them, scroll down.

( Clarification about the third theme: one of the jammers, Saskia, had her birthday that day and brought cookies for everyone.  We were so happy that her birthday wishes made it into the top-3 voted themes of the jam. )

This is a game that was started at the Game Jam that took place in the Game Science Center in Berlin, in June 2016. It was in the context of the Lange Nacht der Wissenschaften (Long night of the sciences). The theme of the jam was “Science”. One month later, at the July 2016 Berlin Mini Game Jam, we continued working on it.

It is a story, written in Twine, about a scientist that one day divides by zero and gets sent to a fantasy land inhabited by anthropomorphic animals. His mission, is to find the way back home. The delightful sketches that illustrate each passage were drawn by Marthe Rosenow. The concept of the story was also hers. The texts were written by me.

At this point, the story (text) is finished. The sketches for 2/3 of the game are also there. Unfortunately, there was not enough time to complete 100% of the sketches.  My fault: I got carried away and wrote a lot of text, too much for the time limit that we had.

Note: every passage has links to continue at the bottom. Depending on your browser resolution, you might not see it at first. If so, please scroll down or use the zoom function of the browser to make everything smaller, so that it fits.

One of the themes of the November Mini Game Jam was “Don’t press that button”.  In the game we made, you are Captain Carrotocket, and your mission is to cross the Cabbage Belts with your beloved spaceship: The Carrotocket Z.

With the cursor keys you control your robotic hand.  You have to find the blinking button that controls the fuel dosage of the Carrotocket Z, and press it using the space bar.  Be careful not to press the button that shall not be pressed.  You will know it when you see it.

Art by Michael Hussinger, code by me.

The game Michael and me made during the September 2017 Berlin Mini Game Jam.  Going in the direction “children-friendly”.  One of the themes was “masks”, so we made a game where there is a bunch of cats frolicking around while wearing masks.  You can move the spotlight with your mouse and have to find a particular cat, the picture of which you can see in the top-left corner of the screen.

This game prototype was made at the July 2017 Berlin Mini Game Jam.  Patricia wrote the music, Michael made the graphics, and I hacked some code in Löve2D.  We formed the team “The Thin Theme Team”.

The idea is to represent an alien city.  In this alien planet, buildings grow like plants.  Your job is to move the clouds so that the rain is distributed and the city develops.  It is an open ended game with no ending.

This is a game we made at the October 2016 Berlin Mini Game Jam.  The theme was “microorganisms”.  It’s a game inspired in Puyo Puyo and Puzzle Bobble.  You command a little mouse that is trying to combat a micro-organism infestation in the fridge, by shooting little capsules like in the classic Doctor Mario.  These micro-organisms merge with each other by color, forming bigger and bigger rectangles.  Using the special “rainbow” capsule, you can pop them out.  Bigger rectangles yield higher scores, and combos also count.  The goal of the game is to survive as long as you can while collecting more and more points.

The graphics were made by Michael Hussinger, code by myself.  The game has no sound or music because… laziness on my part (I was the one supposed to do that).  As usual, made in Löve2D.  Available at Google Play. 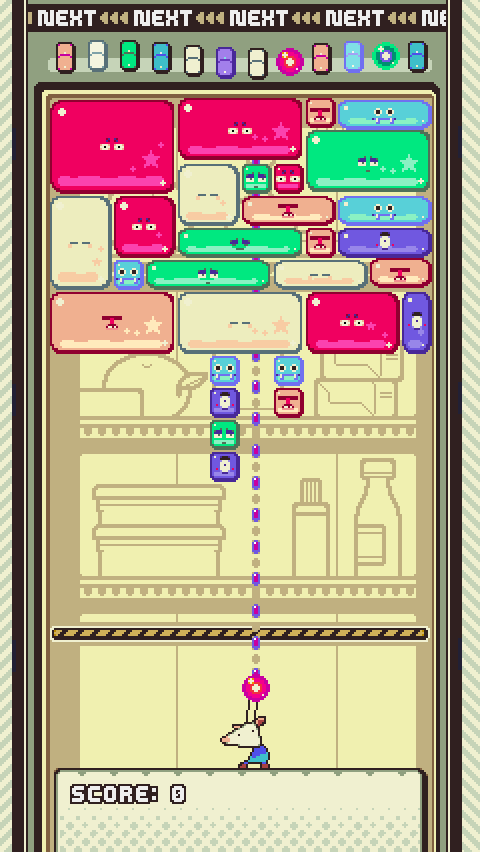 I went through all my game catalog and removed all links to Dropbox.  Those old games have been moved to Github now.  This affects mostly old Flash and Html5 games that I made some years ago.

Once upon a time, it was possible to host static websites in your public Dropbox directory.  Since a few months ago, when a user clicks on one of those links, they are offered the possibility to download “index.html”, instead of showing the hosted site.  In practical terms, you could not play the games any more unless you figured out the rest of the files and downloaded them and played them locally.  In order to fix this problem, as mentioned above, I have removed all my public data from Dropbox, and moved the games to Github.

With this change, as of today, you still should be able to play/download all the games from this website.

This is a game we made during the November 2016 Berlin Mini Game Jam.  I did some more work on it during the December Mini Game Jam.  It is a simple “Boss fight” concept, with one single boss.  We reused part of the code of Because.  As usual, it’s made with Löve2D.

The original resolution is 300×200 pixels, but the game accepts zooming in and out by pressing + and -.  Check the Readme file for further instructions. 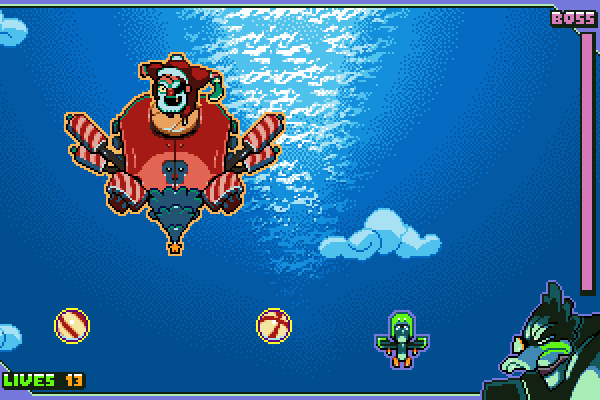 The theme for the Global Game Jam 2016 was “Ritual”.  During the brainstorming phase, Arisa Matzanke (game design) and Alpha Rats (graphics) pitched an idea I found interesting enough, even if it’s a straight forward interpretation of the theme:  combine items to summon Satan.  The player would be presented with an initial set of items, that combined would produce new items, until reaching at some point the necessary items to perform the final invocation.  I joined them as the coder of the team.

We recruited Kirill Krysov to help with the graphics, since this game would have a lot of graphical content, and Cédric Douhaire offered to make some music for our game.  During the jam, we also recruited Ruth Bosch for designing a cool logo.  It might have been one of the biggest jam-teams I’ve been in, but it worked pretty well: there was enough work for all of us to do.

As usual, I used Löve2D, so that the implementation, code-wise, was simple and straight forward, with also multi-platform support out-of-the-box with no extra effort required.

The game has three different endings, one of them being the Satan Summoning.  The other two, you will have to find yourself.  The game is played completely with the mouse (or finger, if you play the Android version).  Besides, in the desktop version, you can exit the game by pressing ESC any time, switch between windowed and full-screen with F1, or reset the game with F5.

The game is available for free at Google Play.  Please do not download the version from the project page at the Global Game Jam website.  It’s still an older version with some bugs and missing features, and we’re not allowed to update the game any more in there.  In this post you can find the proper download links for the latest version, for all desktop platforms (64 bits) as well as the Android APK.  The Löve file is also provided if you don’t find your platform there, it has been tested on versions 0.9 and 0.10 of the engine. 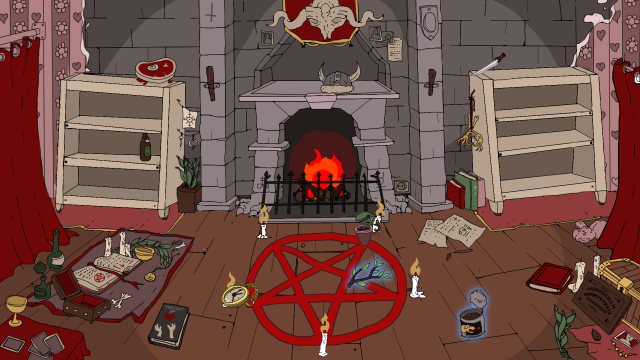